This was my second Phish show in Japan. The boys played an afternoon concert in Hibiya Park.

Download/listen link for 6/11/00 (courtesy of Phishows.com)

Here's five videos (playlist courtesy of silverchair97) from the Hibiya Park show including First Tube, Farmhouse, Bug, Back on the Train and Character Zero. There are bits of backstage interviews spliced in with the concert footage. Good stuff. 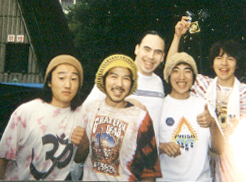 Pauly with members of Horse
Posted by Pauly at 4:20 AM