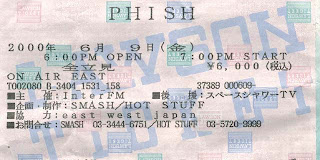 I was among the handful of North Americans who made the trek out to Japan to see Phish in 2000. I was a tour rat those days and dropped everything to get the chance to visit the land of the rising sun with some of my closest friends and see one of my favorite bands six times along the way.

Eight years later, my trip to Japan stands out as one of the most amazing experiences of my life. And I've criss-crossed the globe extensively over the last three years, yet the Japan trip continues to be my favorite. There's not a day that goes by where I don't think about some aspect of that mind-melting journey.

I've seen Phish 151 times and the Japan tour represented some of the most exhilarating and intimate Phish experiences that I ever had. In fact two of my top 10 shows of all time are from the 2000 Japan tour.

Over the next week or so, I'm going to be writing a lot about Phish's Japan Tour in 2000. I welcome the flashbacks. These are the memories that keep me warm on frigid nights.

Encore: You Enjoy Myself 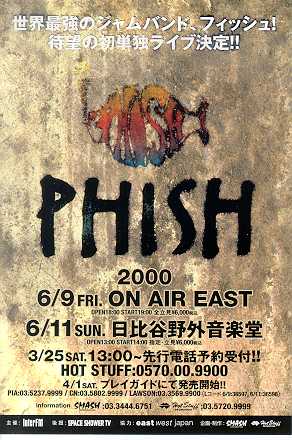 Poster in Tokyo subways
I flew to Tokyo from NYC with my best friend Senor and we met up with Beano, a friend from college who had been traveling all over South East Asia. We stayed in a Japanese style hostel. I had a single room that was the size of a bathroom stall which included a small locker, miniature TV, and a futon mattress. They had squat toilets and you had to basically hover over a hole in the ground to shit.

The first Tokyo show was the only Phish show on the Japan tour that I did not attend. Senor and I couldn't find a ticket. Only Beano had a ticket. Senor and I got shutout even though we showed up three hours early to find an extra. No such luck. We heard that members of the Yakuza (Japanese mafia) were selling tickets for over $100 US and that they were all counterfeits.

We ended up listening to the show at the back door to the club. I met a cool roadie who let us chill out. Before the show, I met several Japhans, including the guys from the band Horse... Yuh, Jun, and Kohei. They were 20-something musicians from Tokyo dressed up in tie-dyes. They were among a sub-culture of hardcore Japanese hippies. It was surreal. They heard me shout, "I need a miracle!" Their English wasn't great, but since they were Deadheads, they knew the expression. We struck up a conversation and had been friends ever since.

I quickly discovered that shrooms were legal in Japan (at that time) and met a few folks from Osaka who were selling them on the street. I also met a girl from California, who ended up being my Japan tour crush and we'd hang out at every show.

On just my second day in Tokyo, I ate at a noodle bar for lunch and scored hashish from Iranian dealers. I didn't get to see Phish, but it was a fun day away. I ate mushrooms and smoked hash in the alley with a dozens other Phisheads who couldn't score a ticket as we danced away to the muffled sounds of Phish's first show in Japan.

I missed the first show but would catch the next six.
Posted by Pauly at 4:20 AM

awesome stuff, these are some of my fave pauly stories. i really enjoyed the last truckin tale and looking forward to more here.

Sounds like quite the show and look forward to hearing more about the Japan 2000 run. I wanted to share with you this little nugget I just came across and thought may interest you...