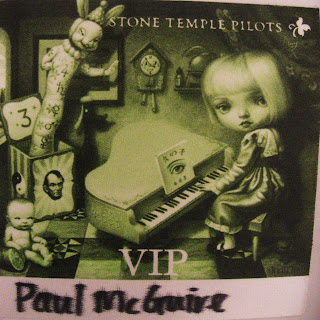 Encore: Dead and Bloated, Trippin' on a Hole in a Paper Heart

One of my good friends, Schecky, used to manage Stone Temple Pilots back in the 1990s. These days he's in the poker industry but he still has connections in music. He hooked up a bunch of us with tickets and a VIP pass, which was good enough to get backstage.

I kinda drank heavily and knocked back a bunch of Peronis. The show was better than average. Schecky saw them play two nights earlier and mentioned that the crowd was really into the show that night and that according to the guys in the band... the felt that it was the best show of this tour.

The highlights were the ten minutes where they played Plush and Interstate Love Song back-to-back. Yeah, those were their two most-popular tunes and had the entire crowd at Pearl rocking.

The crowd was made up of folks my age and older. I guess we were all teenagers or in college when STP hit the scene in the early 1990s. The tickets in our section were priced at $80. I didn't have to pay a cent but man, that's a lot of dough for a band that's led by a wastoid.

He was wasted on something and would mutter random shit in between songs. They did an interesting medley of two Beatles songs when Scott started rambling on stuff about the Beatles and Led Zeppelin. The band started playing Ticket to Ride > Day Tripper before they stopped and jammed out a song about Courtney Love.

Weiland's voice is not as strong as it once was and the sound was mixed to drown that out at times. He's still a rock star with amazing stage presence. I would have loved to have seen them in 1994.

Thanks again to Schecky for the tickets!
Posted by Pauly at 4:20 PM

I guess Scott decided to fall off the wagon when they arrived in Texas. There were only a few words we understood during his incoherent rambling between songs. Even though he sounded good while he was singing it almost ruined the show. I have been a fan since the beginning of STP and I have seen them 4 times in concert. He was under the influence more this time than any other. That is a sign of weakness IMO. I would not be suprised if that was the last time I see them…