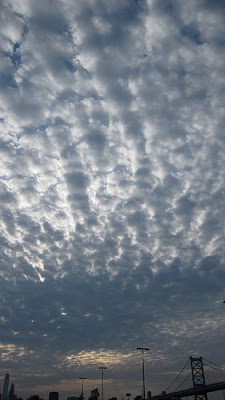 I lie on my back and let the sky fill my vision. Blue shot through with marble of clouds, an impressionistic piece that Manet and Monet together couldn't have concocted. It's quiet now, the happy mob hustles outside still. Lines at the bathroom merely a rumor. But soon, they will come.

I've been a fan of Phish for a dozen years, but for reasons both good and bad, I've never made a show. In a couple hours, it begins. It also began in 1997 when I first heard "Rift" and was hooked. It also began the moment we arrived in lot eleven, the furthermost corner of the furthermost lot. We drank cans of Budweiser in the shadow of the train trestle and watched the Phish show.

When it comes to this band, the crowd is very much part of The Show. It's a hustle, it's a vibe, it's a scene, it's disturbing and soothing and ugly and beautiful and it smells awful and it smells sweet. It's a show. No, that's too reductive for what is on display: it's The Show. Hippies looping around to tribal drums in every kind of Phish garb, unworried to be wearing the shirt of the band they're going to see. It's a non-judgmental group, and they realize that we've come through to calm waters, where the guy who says "don't be That Guy" is the one who is, in fact, That Guy. They're hip and they're past it.

What do you want to buy? Burrito? Garlic grilled cheese? Hackey sack? Oddly expensive balloons? Land in Montana? Bowling pins suitable for juggling? Labradoodles? It's all here. Welcome to the Amazing Traveling Phish Show. Jump right into the stewpot and add your spices to the stew. When stirred, Phish fans make their own gravy.

We walk across every lot, my two friends and I. I'm texting Pauly to find his locale. "Joker and I are in matching track suits, selling LOST shirts and blasting music," he writes. I don't think I'm going to miss Pauly in a track suit, and I don't. Ambling up, I ask "hey, doesn't you have a blog?? "Are you the Goat?" Pauly asks. That's so odd to me, but there it is. A guy I've never met knows me as The Goat, and indeed, I am The Goat. It seems appropriate here somehow. Pauly is as good as advertised. He greets us warmly, and I score a "Bathtub Jin" tee shirt. Thanks, Paul. We shoot the breeze for a while, but the venue beckons, and I'm just too excited to get in there. It's going to happen. It really is.

Later, the tribe has arrived. Lines are deep for the bathrooms and as filthy as a pirate's lair. I'm just getting out when I hear the band take the stage and rip into "Chalkdust Torture," which is now and forever Track 1, Disc 1 of my Phish Experience. First show and I haven't yet seen them take the stage. Phish Game #183: Go into the trench and dodge the dancing hippies. They don't see you, they're in pure vegetable music-bliss. You've got to be quick. Extra points if you can dance with them without their noticing it.

Pushing my way into the press of dancing Phish heads. I'm going to try to find my friends, and it will take some doing. I know my latitude but not my longitude, and you need to become like water in here. Go where the flow takes you; fill the gaps that open. Keep moving. I stop when the guys break into "Fee". Lovely. Trey even flubs the third verse to make us feel like Phish is truly back.

Phish Game #34: Find your way back to your party during a set. Take your time until you realize that the whole crowd is your party.

Phish Game #15: Surrender to the flow.

I've found my crew. "Wolfman's" is on tap, and it is delicious. This isn't sloppy Phish, it's focused Phish, and the difference is palpable. To underscore this, they tear into a flawless "Guyute."

Phish Game #91: Try to find even one person who either 1) doesn't know every lyric or 2) isn't dancing. Impossible.

They pause at the end of "My Sweet One", holding perfectly still to draw out the anticipa


tion before the final syllable. It's fitting. Phish has paused before. They paused so long, held so still, we were damn sure they wouldn't be back. But now, they are, and so now the return is a sort of new beginning. In the parking lot, I saw a t-shirt where "The Simpsons" comic book guy was berating Trey. "Worst. Ending. Ever."

We know what that meant. The Coventry show was beset by a vicious form of the sloppiness that had plagued the band in the years following the hiatus. Trey had mangled what we all thought was the last "Stash" ever. The final song of the final set, "The Curtain With", was such a botch they actually had to start over. But now, they are focused, tight. Like no other band, they seem to communicate to their crowd through their song choices -- or, perhaps, their fans peruse their song choices like tea leaves, looking for omens, like no other. The first song back, in Hampton, was "Fluffhead," and was widely seen as a message to the fans. "We're back, and we're here to entertain you with your favorites. We're not above that anymore." Now, their precision, their choice of intricate, composed pieces, seems to be assuring us. "Don't worry," it says, "We're taking the music seriously again." When they cut into a flawless "Wedge", the lawn starts a glow ring war in grateful reply.

A day from now, my buddy Ben will write:

This isnt one of those shows where you say it is great, while keeping in mind that you are biased toward the band and therefore perhaps a little too forgiving. 2000 and 2003 had a lot of those shows where you were often clapping just to tell the band you like them in spite of the fact that that was the weakest bowie you had ever heard. last night, you clapped to thank the band for taking you and their music seriously, but not so seriously that it couldn't just be fun again. for a while in the past, there were moments where you were always a little on edge wondering when the tractor trailer was going to smash headlong into a bus full of cub scouts. last night, it became clear early that you could sit back and know that the driver was in control of his vehicle, and that all would be okay.

Here's where it all becomes real: The crowd starts calling for "Tube" and the band honors the request.

"Do they usually do this?" I ask my friend.

"It's unheard of," he says, shaking his head.

The Tube is amazing. When it is done, Trey says, "Well, I guess we'd better play this one, then," and cuts into a "First Tube" to close out a first set that is everything I could possibly hope. Phish Game #1: Try to guess the upcoming set opener. Pauly texts me his guess of "Halley's Comet". "Carini, I says," is my reply, and a $2 prop bet is quickly established. We're both wrong. Instead, it's the sickest "Sand" ever, a 22 minute jam in three parts that will be teased out later in the night.

There's even more to come. They are going to play the Phish song most meaningful to me soon, but it's not even neccessary. The boys are back, and they've already found their voice. It brings me to my knees.

Email ThisBlogThis!Share to TwitterShare to FacebookShare to Pinterest
Labels: Camden 2009

I enjoyed that very much. We are off to play the games!

for a while in the past, there were moments where you were always a little on edge wondering when the tractor trailer was going to smash headlong into a bus full of cub scouts

I live 6 blocks from the Sevierville Walmart. Damn, I wish I knew you were close, I'd have bought you some tube socks or something, and you would be able to put a face to my many comments or your various sites.