Show Recap: Camden aka Phish in the Hood 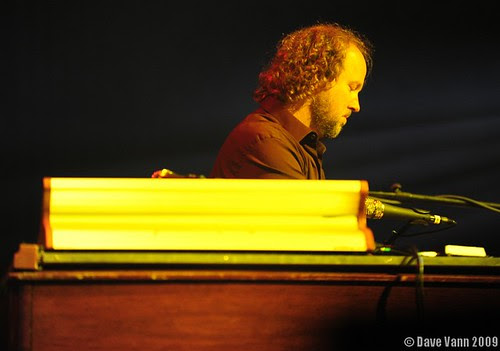 Photo by phishfromtheroad
"Sunday is wear your track suit to the show day," reminded the Joker.

The last time we wore the now infamous track suits were in Hampton for the third show of the Reunion run. And now, the Joker insists that we wear it to Sunday Phish shows.

We had our first lengthy span of traveling this tour. We woke up in Providence, RI and hired Leroy to drive us to Camden, NJ with a quick pit stop in NYC to meet my brother for lunch. We made it to Camden (despite the detour through the ghetto) with plenty of time to hang out in the lot. The Joker's blasted heady tunes on his mobile DJ rig and set up a table (thanks to Senor for the table) to hawk his LOST lot t-shirts. They sold like hotcakes.

Mike Gordon drove past us in a golf cart while two girls tailgating next to us decided to pee in between their SUV and our vehicle. We caught a glimpse of bush. But they were drunk and annoying and we wanted nothing to do with them. They constantly gave the Joker shit about his music selections. They were so spun out that all they wanted to listen to was Dave Matthews Band. They were amateurs and had no idea that Stevie Wonder was black.

At Great Woods, the federales cracked down on vending. At Jones Beach, it was a crack down on drinking. At Camden? It was a free-for-all. I think I saw one cop car patrol the lot in three hours. They let everyone be which contributed to the festive and relaxed atmosphere. Kid Dynamite and his buddy stopped by along with Julius Goat. First time I met the elusive poker blogger turned music blogger. ScottyB from Glide/Hidden Track/YEMBlog stopped by to chill out.

I helped the Joker sell stickers and t-shirts and we were recognized by several Coventry readers. It was awesome running into you guys! If you see us at the rest of the shows definitely stop us and say hello. We'd love to meet our readers and fellow music nerds.

We wandered into the venue and even though we had lawn seats, we managed to slip past security and make our way to one of the front sections. We almost pulled off the impossible task until we ran into an overzealous usher. Although we successfully bluffed him the first time, I felt uneasy that we couldn't pull it off a second time in case he came back around. After all, we stood out with the matching track suits and he couldn't miss us. We opted to hang out in a different section where Bruce and Susan hungout. All was good for the first song. But in the middle of Fee, I was asked to leave. The Joker and I decided it was time to head up to the lawn. After all, the lawn at Camden is not bad compared to other outdoor ampitheatres.

I dug the fact that they broke out Fee in the first set and as per usual, Trey flubbed the lyrics. Big Red needs a teleprompter. All that oxy abuse fried his brain.

We also got to hear a few tunes that they have not played yet either on this tour, since Hampton, or since their return. I was geeked out about Lizards. And of course, the highlight of the set was a bong-rattling Tube followed up by First Tube to end the hot set.

Quote of Camden? Overheard during Set 1... "I cant believe I lost an ounce. I need to wait until my doses kick I before I smoke DMT at set break."

I lost my small notebook during set break. Shit, and I was sober too. The third sober show out of four so far this tour. Oh well, if anyone comes across my notebook, please shoot me an email. And yes, I'm waiting until Bonnaroo to let loose.

I refused to piss during set break because the lines were too long, yet the Joker braved the battlezone. We moved to Page side of the lawn for the second set. Page side? Rage side. We hung out in a hip section where everyone was getting down and dancing. Appropriate for a jamming second set.

We wondered what the hell happened to Sand. It was not in the mix in Hampton and fell off the radar... until Camden. Might be the tour highlight so far. 22 minutes of pure sickness. Listen for yourself. Tweezer was another personal tour highlight. Dark and dank. Fishman stepped up his playing at Camden and that improved effort was evident during the plodding jams during Sand and Tweezer.

The encore? Four songs. So I can't complain even though I thought that the new tune was a bit dainty. Reminded me too much of Phishy version of Shine. However, I had zero complaints about Antelope and Tweprise.

Of course, it might have been slightly more energetic than the Jones Beach Antelope, however, that epic Ghost + Antelope = Ghostalope definitely makes the highlight reel of the East Coast run.

The lawn slowly cleared out when the show ended and the Joker and I hung out to let the congestion clear before we made our exit. Garbage cluttered the lawn. You could barely see any green grass and instead tons of leftover trash and empty plastic bottles and cups. Even lawn chairs were left behind with empty drug baggies and empty airport bottles of booze. Dozens and dozens of soiled blankets were abandoned. Some Phishy chick lost her sandals while a group of wookies sifted through all the trash looking for anything to scavenge. It reminded me of little children from a third world country digging through landfills in search of food and clothing.

Four shows down. Several more to go. We have a night off to travel to the South for the Asheville show, which I had been anticipating as the tour sleeper. Stay tuned to find out what happens...
Posted by Pauly at 4:20 AM