Skip to main content
Labels
Posted by the joker June 15, 2009 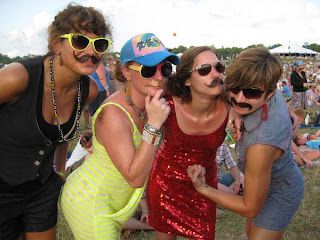 The Girls of Coventry
Photo by: Lauren Spuhler
Hello loyal readers- I am at the Nashville airport waiting on my plane back to Colorado. Sorry for the lack of live blogging the past 2 days. Dr. Pauly and I contributed to the CoventryMusic twitter page, and in case you missed it, here are a few of my favorites:

im not gonna out the person who drove an hour the wrong way leaving #bonnaroo, but his name rhymes with jolly
---
disco sis #2 brokeup with her lot boyfriend... he then took her stash & stole her lipstick
---
first tube= return of the muthafuckin jedi! #phish
---
we think this is set break.... strawberry shortcake hugged a gorilla who liked pills & bananas
---
i think i saw a unicorn fly out of trey's guitar during glory days with bruce. im in awe. #phish
---
huge glow stick war during punch. reminds me of old #phish festys
---
as disco sis #1 hugged me in triumph for choosing the ac/dc bag opener:"joker, you smell wook-tastic!"
---
i lost the prop bet to phil. he picked discosis #1 & i backed the joker.we have a high stakes pool going for first cover song phish plays
---
very impressed...... disco sis #1 puked & rallied. shes pounding beers & beat the joker in a staring contest
---
"are you ready for muthfuckin phish?" asked snoop. "i never thought i'd hear those words come from snoops mouth," said the joker
---
snoop did a tribute to tupac. spun out wook: "who's too pack?" pauly: "he played bass for widespread painc."
---
even when you are a famous music blogger, you still have to wait to use a porta potty
---
joker is back in business... he found a sack of shirts that was not confiscated.
---
LOST + phish tshirts were a big hit. the last 20 i had left got confiscated. will print up more for back orders and red rocks>gorge.
---
joker's tshirt operation busted by mounties for a second day in a row
---
there so much fuckin blow here in bonnaroo that i feel like im walking down a street in bogota, colombia...
---
phil won the puke pool. he puked first.... nice job.
---
disco sis2 called out the wookie for giving her a bloody lip when the hooked up. he apologized. now they're going steady
---
Broseph telling us about his late night hook up stories. H made a girl do the walk of shame at 8am as she stumbled out of his tent
---
me: "who punched u? your lip is all fucked up?" disco sis 2: "i hooked up w/ guy rolling on a lot of E & bit the shit out of my lip"
---
u havent had the full on bonnnaroo experience until u take a shit in port o pottie while tripping balls
---
weird to hear "head like a hole" trickle through the background as i wander down shakedown #bonnaroo
---
the best things about festivals are the things not on the schedule, that just happen
---
late night shakedown drug report.... nugs & shrooms are sparse. plenty of ya-yo & doses. unable to find pharmies
---
i lost another prop bet.... i took the under at 11:10pm Sat for when disco sister #1 would puke
---
joker made out with a girl from alabama.... we lost disco sis #2. we think shes makin out with a wookie
---
disco sis #1: "you should make out with charlie." disco sis #2: "ok. im going right now. which one is charlie?"
---
i dont think we're coming into bruce! we're having too much fun drinking at our dance party.
---
disco sis 1: "why does that wookie have a iphone?" ... joker: "thats how they roll in colorado."
---
its gonna be a long night... one of the disco sisters is drinking beer out of a straw.... and all the girls are sporting mustaches
---
someone gave the joker free cheese & bacon fries for wearing the track suit. im eating them now during wilco
---
grob winsthe prop bet... guess hulk hogan's height4
---
broseph told me a story about smoking a joint made of weed smuggled into bonnaroo up the ass of some chick from long island
---
good karma for strawberry shortcake. she lost her wallet last nite & luckily someone turned it into lost & found
---
girltalk getting everyone at bonnaroo to scream "hey we want some pussy!"
---
uncle ted is so shitfaced he's hitting on chicks
---
only losers lose drugs. im not gonna out the person who lost 8 xannies. but his names rhymes w/ poker
---

Editor's Note: Many posts were edited for grammar and spelling...
Labels: Bonnaroo Twitter

Anonymous said…
dude, this twitter manuscript pretty much tells the day in a life for our crew....

Black Min said…
Free 2018 ringtones collection you should refer to and install here:

What are the ringtones you are using? Your ringtone is old and boring? I will mention you the hottest free songs recently. Here are the most downloaded songs of the day: https://ringtonedownload.in/

Hope you like my songs. leave comments for my post for the most complete revision. Thank you!