Here's my no bullshit assessment of the night....

Asheville was the best show of the tour (so far this summer). Phish smoked the shit out the joint. Anyone you says otherwise wasn't fuckin' there.

That's all I gotta say about the music. Listen for yourselves. 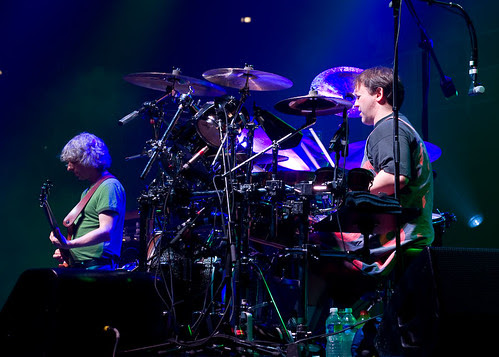 One thing that won't translate on a bootleg is the heat and the loudness. It was hot as fuck inside the Civic Center and it was one of the loudest Phish shows I heard in a very long time. Had the vibe of something circa 1998. Smallish arena with tons of high energy and climatic moments that make Phish shows worth seeing. That's why you go see them on random Tuesday nights in the middle of nowhere, right? Because you never know what they're gonna do next.

On paper... this looks slightly above average. In reality? The best show this tour (out a small sample size).

Even the new songs? Solid versions. Alaska made one helluva Phishy debut while I heard Kill Devil Falls for a third time in five shows. They're getting better at it.

Personal highlights included the first set... Southern Fried Funk... with ass shaking Moma and Tube and even a few moments of Gumbo.

Second set? Smokey smoke smoke smoke... Ghost and Halley's > Maze and Possum as they fed off the frenetic energy of the crowd.

At one juncture, Trey busted out a little story telling and explained the origins of three songs... Dog Faced Boy, Gumbo, Tube. Apparently, Trey wrote those songs after he snuck a peak at Fishman's road journal. Two of those are some of my all time favorites. And Phish played all three in a row... which feature two consecutive show with Tube. A rare and funky treat indeed.

Everyone seemed to have a good time, especially Otis who attended his first ever Phish show. Talk about an epic show to be your first... ever. We had a cool crew this time... with the Joker, Otis, G-Rob, Timmy, Mrs. G-Rob, Phil, and the Disco Sisters from Raleigh.

After the four show run for me on the East Coast with some old friends from college, I headed to the Asheville shows with a newer group of friends that I became tight with in the years after the breakup. Every show it seems like I'm going with a friend who is catching their first show back after the breakup.

When the lights went on during set break, popped balloons cluttered the floor and a guy chomping on a bag of mushrooms next to me and a circle of heads passing around a bottle of Jagermeister. The crowd and town really provided a plush environment for Phish to perform in.

Asheville is the Boulder of the South as the Joker would say. I thought it was Wookie HQ in the Southeast. I had not seen that many wooks in a very long time. They all came out of the mountains and descended upon town. Many of them even had tickets.

Asheville is an amazing town nestled in the mountains. Laid back with welcoming locals. Frantic crowd. All of those factors added up to a top notch Phish show. I'm gonna be using Asheville as a yard stick for all future Phish shows on this tour.

Man, can't wait for Knoxville before it's onto Bonnaroo. But man, after the Asheville show, I kinda wish they played here again on Wednesday.

Anonymous said…
nice post. couldn't agree more on Phish! If you can't get enough of them, you should check out the Live from Clifford Ball special Fuse is airing tomorrow at 4pm. I can't wait to see what songs they are gonna song. go here to make sure you have the channel also..so glad I have it!
Channel Finder
6/12/2009 1:05 PM