"I come unglued while in mid-air, and land to reform. Limb by limb."
I headed into Boston early Sunday afternoon, taking the T in from the last stop on the D line - Riverside. Before I even got on the train, I had my suspicions that many of the people waiting with me were off to the Phish show. My instincts proved correct when I overheard two of the guys talking about quitting smoking "between Great Woods and Hartford," and I grinned instinctively.

By 12:45pm I was outside of Fenway, where things were still sedate. I figured an outdoor table at Cask'n'Flagon was too good an opportunity to pass up, so I took advantage of the open table and sat down to start pounding vodka & sodas as I desperately tried to angle myself beneath a wispy tree to gain some shelter from the ruthless sun. My waitress was taking forever between rounds, so I asked if she could bring me a double in a pint glass, but she said they couldn't do that. This was interesting, because when my buddy Ryan eventually caught up with me a few hours later, he sat down and ordered 3 beers, which she promptly brought out!

The scene outside Fenway heated up like a beehive, with young hippies handing out sample CD's, ads for Gathering of the Vibes, Phish newspapers, and hawking t-shirts. Fans were also eagerly snapping up the official $32 t-shirts from the licensed vendors. I heard the band soundchecking stuff several times over the few hours, but with the audio from the Red Sox game blasting from the bar's sound system, I couldn't make out the songs.

After several hours roasting in the sun and slamming drinks, stomachs fueled by Buffalo chicken wraps, we hooked up with Ryan's friend T, who works for the Red Sox. T is the one who first told us about the Phish Fenway show - the tip which I gave Pauly, and which was disputed by several people. Obviously, T was right, and the show was on! So anyway, T walks us in a side door on Yawkey way, through the employee cubicles, and through another door right into the bowels of the park. A few quick staircases, and we were in a luxury box in left field, overlooking the expanse of seats, the massive stage, and a light rain. Now, for a Jewish boy from the Boston suburbs, Fenway Park is as close to a cathedral as I'm likely to get. Every time I'm there it's an awe inspiring experience. This was no different, in fact, it was even more insane, as we had the inside tour from T.

"This doesn't suck," I told Ryan, who could do nothing but agree, as we continued to crushbeers and reload with pizza and sausages. "Best part is we can come back here to take a dump," Ryan observed, which was indeed a nice perk, although one which I'd certainly try to avoid taking advantage of. Sitting in the open air seats outside of the box, looking down at the setup in a stadium that wasn't even open to the public yet, drinking free beer and anticipating the start of what was sure to be an epic Phish show had me wearing a shit eating grin I couldn't and didn't want to take off. I texted my friend MO: "I'm in a luxury box inside Fenway right now. Sox are on the road. Figure it out."

At 6:30 we headed down to our seats on the field in section A2, and were greeted with a light but steady rain. The band came out to do the National Anthem on the pitchers mound, and the crowd was fired up. "Rain just makes it more epic," I told Ryan, who agreed, as Phish made their way back to the stage and opened with Sample in a Jar. I won't go through the whole setlist, which I was live-texting to Pauly - suffice it to say that the show was sick - in a good way. I hit Pauly with "Greatest.Set.Ever" at the end of set 1.

My friend Mark, who was also at the show, texted me "greatest hits," which it was - a display of the band's biggest, hardest hitting songs, including YEM, Down With Disease, Chalkdust, Stash, and David Bowie. The new songs Ocelot and Light were great too, but it was Time Turns Elastic where Phish gave an indication that they're still perfectly capable of rip roaring jams. 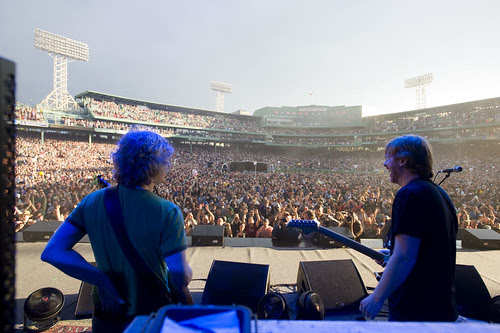 Photo by C. Taylor Crothers
TTE must have lasted 22 minutes, with such severe switches that it left Ryan asking me "Is this the same song?" By the time they ripped into Free, Fenway was absolutely manic - frenzied. Earlier, During Down With Disease I texted Pauly, "I just blew a nut in my pants," and when they went into Destiny Unbound next, I hit him with "I just peed my pants, and I've never even heard this song before!"

Finally, Pauly implored me to send my setlist updates to the Joker as well, and he sent me The Joker's number. I gamely tried to type the number into my phone, but, as I told Pauly, "I'm too drunk to legally text," which turned out to be quite true when I texted "We love to take a bath" to what was ALMOST The Joker's number during Bathtub gin.

As you can imagine, this is a rather odd text to receive if you're not The Joker and you don't know me. I followed that text with "KD here from Fenway" and "Pauly told me to text you, live from set 2." I got a reply "I don't know anyone from Fenway," which resulted in my sending an "oops, sorry" text back to this random person who has 8 out of 10 digits in common with the Joker. This random person wrote back, "It's all good," which made me laugh because the next message I got was Pauly's "lol - it's all good" after I'd explained that I had been texting some random.

It seemed like Cavern would be a natural encore, given that they'd already played a lot of their most popular songs. I know the hard core Phish heads probably hate Sample and Bouncing, but I'd hope that Chalkdust, DwD and Cavern aren't too mainstream for them - those three songs are 3 of my favorites, and I think 3 of Phish's greatest anthems. When they hit the first notes of Cavern, Ryan turned to me and screamed "your song!" I bounced like a pogo stick as they pounded through

"Give the director a serpent deflector
a mudrat detector, a ribbon reflector
a cushion convector, a picture of nectar
a virile dissector,a hormone collector"
Good Times, Bad Times would have blown the roof off Fenway if there was one, and Tweezer Reprise was a predictable but perfect finisher. I didn't realize how drunk I was until several hours later, back at home in the middle of the night, when I awoke with the spins, and teetered into a wall as I tried to make my way to the bathroom to whiz. Still, in my inebriated state, it hit me just then how absolutely tight Phish had played. I'd wondered why they'd played such a mainstream setlist (which I loved) and I realized just then that it was because they wanted to show that they could still play these songs perfectly. Now, maybe the alcohol clouded my judgement, but my memory is of this show being particularly tight in terms of musicianship - no missed notes, no flubs, no offbeat jam endings - just perfection. I hope when I download the show and listen to it, I'm right!

I get to do it all over again Tuesday night at Jones Beach. I hope to see some of you there.

correct. i know - that makes me unworthy in the eyes of "real" Phish fans right?

nice write up. those lux. boxes are definitely the way to pregame for a show! fenway didn't turn out to be my favorite venue to see phish in, and i hope it's not an indication of more stadiums to come, but the novelty of this show made it one that i could not miss. the energy was electric in there, and i kept reminding myself that 95% of the people in the park hadn't been at the ripper of show on night 3 @ Hampton, which explained the absolutely manic state of most people in there. i agree that they were tight as they've ever been, which gets me even more excited for the rest of summer. the flubs were nominal, but i felt like a few of their jams (DWD esp) struggled to resolve to their respective reprises. i could hear them searching to get to the crescendos, but not all of them were nailed. i also noticed a few other flaws, but again... i was hyper-critical since Hampton 3 was so ripping. either way the show was sick and the setlist very pleasing to my tastes, and i have to remind myself to not get hung up on a few imperfections when several hundred thousand notes were otherwise performed in synchronous perfection! how about that new distortion filter mike's been slapping around? nassssty. on to great woods...!!