After a 15-show summer tour (the first leg), the circus had come to a halt at Alpine Valley. I was fortunate to catch 12 out of those 15 performances (I missed Fenway, first night at Jones Beach, and St. Louis) and one or two of the shows I caught (Deer Creek & Asheville) have already solidified themselves as high water marks that Phish 3.0 will be chasing for the rest of the summer and hopefully, for the next few years.

The day of reckoning fell upon us, on Father's Day of all days, as it all came down to the grand finale at Alpine Valley in Wisconsin after thousands and thousands of heads followed their heroes from Fenway Park in Boston via the North East Corridor (Jones Beach, Great Woods, Camden), and through a Southern swing (Asheville, Knoxville, Bonnaroo), and eventually ended up in the Midwest (St. Louis, Burgettstown, Deer Creek, and Alpine Valley).

Yeah, Wisconsin is a lovely state, but I only get to see it when Phish comes to town. I was among the numerous souls who made the sojourn all the way to Wisconsin. Tour closers tend to be overrated by unattainable expectations from fans, not in a bad way, but in a good way because everyone sorta expects the band to do something a little special before they go back into hibernation for several weeks. I've learned over the years to just accept each show as it's own individual treat thereby eliminating any unnecessary expectations on the band and the music.

However, I was still cognizant that Sunday's show was the last show of the tour and hoped for something special and out of the ordinary.

For the first time on this leg, we didn't haven't to wake up and travel. Instead, we slept in and enjoyed the amenities at our lakeside resort. After an adventurous brunch, we played mini-golf. We had several bets going including an overall skins game among seven people including Daddy and his Hey Bub crew. I also gambled heavily against GMoney and Iggy. I ended up shooting the worst score out of my crew, however, I won several clutch skins including a hole-in-one on the 13th hole. I actually hustled my friends for a few bucks before we even got to the lots!

The lot scene at Alpine Valley is among the worst on the tour because of the wafting aroma of pig shit from the adjacent farms and the Nazi-centric tactics of the local law (which included a mobile jail on the premises), so we pre-partied at the lake. We also took Daddy's advice and drove to the venue as late as possible in order to snag a parking space close to the exit so we wouldn't have to wait 2 hours to get out. That sacrifice meant that I only had a few minutes in the lot to sell my extra lawn ticket. Since I had gotten $50 for my extra the previous night (almost double what I expected), I was prepared to give away my extra for free. While standing in line to take a piss, I unsuccessfully negotiated a trade for Xannies from a chick I was pretty sure was coked up to the tits, but she her brain was fried and she muttered things that I could not understand and the deal fell through. I ended up snagging $20 for the extra from a guy standing behind me witnessing the trainwreck of a conversation.

We had lawn seats for the last show and secured a decent spot ten minutes before show time. While we got settled in, a chick stopped in front of us and puked. She had tons of eye makeup and a very expensive hand bag and quickly left after she vomitted.

"See you on Dave Matthews tour!" I shouted as she stumbled away.

One of the guys in front of me tried to cover up the puke with an empty nachos container. That didn't work and a wookie ended up slipping on the puke five minutes into the set. Wookie wipeout on the lawn. It wasn't pretty.

The boys opened the show with Brother and one by one, several of their children wandered out to the front of the stage. The babies were held by an adult and the rest of the children all hopped into an old school metal bathtub for the duration of the opening song. That was Phish's way of paying tribute to their children... on Father's Day. 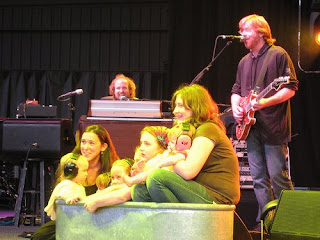 Brother was followed up by... Wolfman's Brother. The version did not necessarily stand out, but I appreciated the brother theme to open the show. For the third song, Trey pointed out that he noticed one fan held up a sign for the last two days so they decided to play one of the two songs he had been asking for (Funky Bitch and Sneaking Sally). The boys ripped into Funky Bitch which was the first time they played it in the Phish 3.0 era. We heard it sound checked in Burgettstown and they finally busted it out.

Iggy commented that the crowd resembled a Sunday church congregation during Divided Sky as thousands of fans thrust their arms up to the heavens.

Joy is a song that fails to move me one bit. I smoked tuff and watched in amazement as GMoney befriended a spun-out wookie who held out a vial of liquid acid. The wook gave GMoney a puddle. Actually, the puddle was so big, it was more like a small pond of liquid sunshine rested in his palm. The wook offered all of us a hit and he ingested puddles of his own. I lost count at four. The wook was hardcore and ready to blast off.

The Taste jam was one of the highlights of the first set. Melodious Page. Nothing makes me happier. The first hour of the set was rocking, with the exception of the new song. However, I was totally disappointed with the last thirty minutes of set 1. I not the biggest fan of TMWSIY > Avenu Malkenu > TMWSIY and Time Turns Elastic is the new "Pauly's Gonna Take a Piss Song." I rallied the troops at the beginning of TTE and told them that was our best bet to take a leak and reload on beers. We timed it perfectly so we caught the last half of TTE which is far superior to the initial ten minutes of that new song.

Shit, after an amazing start of the show, I found myself utterly bored with the last thirty minutes. I would have loved a fatty Mike's > Simple > Weekapuag instead. Alas, I prepped for the second set. I knew that the boys would not leave me hanging.

I gotta say that Crosseyed and Painless > Down with Disease was one of the highlights of the entire tour. Blew me away and my crew is still talking about it the morning after. And that was just the first half of a heady four song sandwich.... Crosseyed and Painless > DWD > Bug > Piper. There was only one flaw in the second set... Velvet Cheese... but they played it well and I focused in on the grin on Page's face as he belted out the lyrics.

I was a little bummed out that I missed Boogie On in St. Louis and kinda expected that we would not see it. That's why it was a pleasant and funky surprise. Everyone knows by now that Slave is my favorite Phish song, and I feel part of a special club of Slave fans because they don't play it frequently. To hear it as a second set ender makes the moment even more special. I stood up on the lawn in quiet reflection during the Slave jam. Flashbacks of all my favorite memories from this tour and Bonnaroo. It's been several years since I embarked on an extensive Phish tour and I missed living life on the fringe.

For the encore, the boys gave us an acapella Grind, followed up by a funkified cover of Frankenstein. Page played his keytair, while Mike donned a flaming bass, and Trey slapped on a five-necked guitar. Phishy hijinks. They're still having fun and as I wrote yesterday, when Phish has fun... they play better... and then I have more fun.

I wish I had more time to write, but I'm pressed for time. The boys are officially back and you just have to listen to the second set at Alpine Valley and hear for yourself. I'm super excited for the second leg of Phish's summer tour, especially Red Rocks and The Gorge.

That's it for now. I'm signing off from Lake Delavan, Wisconsin. I'm driving to Milwookie and flying back to Las Vegas to return to work covering the World Series of Poker. One circus ends, and another begins.

Update: Check out G Cactus' Photostream on Flickr, including a picture of Trey's 5-neck guitar.

hell of a run Pauly, glad you could be the historian for 3.0. Wook slippage on lawn puke during brother is just one of many things that's been missing these past few years.

cutersons with their kids on stage.

would have liked to have heard Boogie, too!

Pauly!! Thanks for bringing us along for the ride by reviewing this tour. I love the man on the scene feel of your reviews.

Also, I'm glad you got a Slave capstone. Nice way to end the tour.

SEE YOU AT THE GORGE!!

thanks for the excellent tour coverage! hope to meet you again in the future.

extra shout out to strawberry shortcake and btreotch for making a lasting impression at a stellar knoxville show! you guys rock!

had A blast on my Midwest Run. I will never for get it! They never missed a beat form the fox all the way to the valley! I loved The First set and DID NOT Leave. What a bad mistake! the bathroom lines were fine.