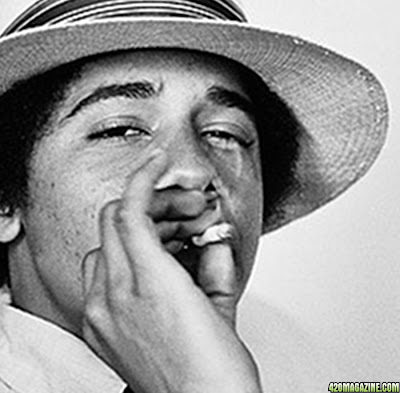 "The past three Presidents have all more or less admitted trying the drug, Nadelmann continues, and the current one, when asked if he inhaled, famously retorted, "I thought that was the point." -How Marijuana Became Legal, Roger Parloff, 9-18-09, Fortune

Fortune magazine published a cover story on the earning potential of pot. The article argues that legal marijuana cultivation and distribution in the United States is happening, and the proprietors are raking in the dough. Dr. Pauly did a post earlier this year on CA's budget crisis and how Gov. Schwarzenegger suggested legal pot could help.

I did a double-take when I saw Fortune this week. This isn't an MSNBC special; this publication lands in thousands of money making laps every month. Growing up in the mostly conservative state of Florida, a magazine with this sort of cover usually ends up in the "censored" section of supermarket periodicals. Not today. Uptight, conservative business types across the south must have spit tobacco in their grits when they pulled this months Fortune out of their mailbox. 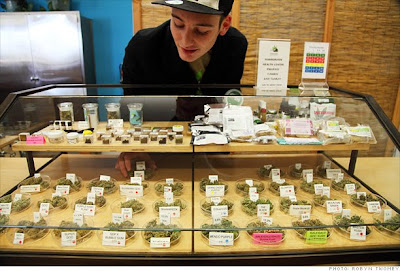 "a bud-tender" photo by fortune
For those of you wondering why I find this so fascinating, the normalization of marijuana use in the United States has gone virtually unnoticed by many. In Florida for example, even minor possession or paraphernalia still warrant's 1 year in jail, not to mention steep fines and other obligations. Cultivation is a huge risk. Seeing a major financial, mass-media publication go with a pro-marijuana cover story is a positive indicator that a national, pro-marijuana additude shift may be closer. Maybe??

The 2000+ word article details the sort of fairy tale scenario my heady brothers and sisters out west have been spouting for a while. My friends and I hear stories, but there is little to hang our hats on. I think it's like Vegas. You hear about it, but until you go one can't fully appreciate the greatness that is. When a story such as the Fortune article comes out, it legitimizes a dream.

photo by Fortune
As some of you undoubtedly knew, there are more marijuana dispensaries in LA than there are Starbucks. I'm most interested in the hash selection. Seriously though, the article is top notch in the traditional Fortune way. Nadelmann spends pages detailing the business of running a dispensary. He also discusses the bending legal climate, as well as interviewing several financial experts who predict the legal pot market will grow.

The article also contains some top notch video's with the "fortune" stamp of approval on them (hilarious).


I look forward to the day I can visit out west for some firsthand dispensary edict lessons.
Labels: fortune Marijuana Legalization

mikey freshh said…
i've been to several dispensaries in cali
my buddy had his card, i made the selections
i'm from florida too and i was in awe
i've been to amsterdam, and the bud in cali was cheaper and more dank. huge selection. like 20 types in jars.
9/24/2009 10:10 PM

I got my card by claiming I have insomnia. The doctor took my blood pressure, asked a few questions, I paid my $150 and 10 minutes later, I was at a dispensary buying some heady sativa.

It's just dumb, it's all show, but hey, it beats calling a number in Venice and waiting at a Blockbuster for the dealer to show up.

Unknown said…
What a sham...but a necessary first step. Love that the marajuana dispenseries trump the McDonald's.
9/25/2009 7:01 AM