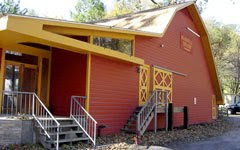 Let's get right to it. This had to be one of the best shows I've seen all year in a great magical venue. The Bearville Theater sits next to a creek about two miles outside of Woodstock proper. There are two restaurants in separate buildings in front of the theatre and next door is WDST: Woodstock's radio station and hosts of the nights festivities.

Inside the front door is a lounge area where they have tables set up with tea lights and the a large bar. On the walls are pictures some black and white, some color of the many musicians who have called Woodstock home at one time or the other or passed thru: Bob Dylan, The Band, Jimi Hendrix, Janis Joplin. There is a deck off the back that has tables too, and on a warm night you can head outside and hang out there.

The venue has totally laid back vibe. I heard one local couple say to a friend "we decided to come down to hang out and check the show out" And this being Woodstock after all, you never know who might show up, as its the current home of Levon Helm ( his Midnight Rambles are legendary shows that sell out weeks in advance), Don Fagen of Steely Dan, Michael Lang promoter of 1969's Woodstock Festival, and Robert Thurman (father of Uma , and co-founder of NYC's Tibet House). The Black Crowes recorded their latest album at Levon's studio. Medeski, Martin and Wood often pass through. In fact, the Wood brothers will be playing Bearsville in a few weeks.

I got there way early as I thought the festivities started at 8PM. The doors didn't open till 8 PM and I wound up cooling my heels. I had a ticket to get rid of as Kim couldn't make it. I sold it for a little below face to a couple from Chicago (Carrie and Mike) who had flown in to see the Midnight Ramble the next night. There was no Shakedown Street, no Nitrous Mafia, not too many wookies or pairs of patchy pants were even present. The first dude in line actually marched right into the concert area and planted himself in front of what I figured would be Mike's amp (I assumed he would take same position as he does with Phish and I was right).

I checked out the stuff for sale. I almost bought the Bearsville Theater poster and immediately thought of the Joker's artwork. The poster for Bearsville was a stretch brown bear ala a stretch limousine. Way Cool!! The other cool poster was the body of a person or scarecrow in flannel but the head was an ear of corn. Think that was from one of the two previous shows. Equally way cool.

I tried to get the dude selling Mike's stuff to tell me what they had soundchecked live over on WDST. He said "I honestly can't remember, but it was good and you wont be disappointed." I went to get a soda found the setlist over on the soundboard but didnt take a picture of it or swipe it or copy it down. It wouldn't have mattered anyway as that night the band veered from the original setlist (as per Scott Murawski's blog from the road). I did go back to look at the CD's and as I was looking, I muttered to myself "Oh one of my favorite Max Creek tunes is on this" (Emotional Railroad) that got the dude's attention and he told me he does the sound for Max Creek and of course before we could continue a conversation and I could get his name a ton of people came over and I told him to vend!!

The surprise of the evening was the solo acoustic opening act of Reid Genauer. Reid used to play in a band called StrangeFolk (which also was founded out of Burlington Vt and UVM) and is now with Assembly of Dust who did a great show at Gathering of the Vibes. The only thing that marred his performance was the baby who cried thru at least two of his songs. I shall not say a word because knowing my luck it will turn out to be Mike Gordon's kid who was wailing. Insert smiley face here!! I dont have Reid's set list but i know it included the tunes Cold Coffee, Second Song and Leadbelly and Speculator. Second Song is on the new AOD album No Assembly Required which Mike Gordon performs on as well as Keller Williams, Al Shnieer of Moe., John Scofield, David Grisman, Grace Potter and Jeff Pevar (Crosby, Pevar and Raymond). Reid was joined by Todd Isler (Mike's drummer) on a couple of tunes.

Reid said "I know you folks have come to have your face melted, well I'm the butter". I know I was not disappointed. He mentioned that one song, I believe it was Cold Coffee had been compared to The Band. I could hear the same range/pitch in his voice as Levon Helm's in "The Night They Drove old Dixie Down" but he also reminded me of Neil Young at times too.

After a short break. Mike's band took the stage. I was one person off the stage in front of Scott's amp and microphone stand but had an awesome view of both keyboardist Tom Cleary and Mike. If Scott stood 5 feet back on stage I was perhaps no more then 8-10 feet from him and about the same to Mike and Tom. I still had to crane my neck up though. For those of you not familiar with the line up the Mike Gordon Band consists of:

The set-up was pretty similar to Phish with Tom in Page's spot, Scott in Trey's and Craig on percussion and Todd Isler anchoring from the back middle position. Mike of course got huge screams when he came out but there was equally load screams for Scott too. As there are dudes Ghey for Trey there are dudes equally as Ghey for Scott. When I asked the dude next to me who did a SCOTTY scream if he was a fan of Max Creek he said no "Only became aware of him when he played with Bill Kreutzmann's band BK3. What about you?" I smugly got to reply been following Max Creek for 23-24 years.

I've just listed the setlist best as I could and my mental recollections of the evening. As I mentioned above they veered from it and I am no expert on Mike tunes although I have seen him before at SPAC with Trey (pre-Phish 3.0 and pre Oxy-clean Trey!!).

Suskind Hotel (the opener was nice and funky loved this tune)
Walls Of Time
percussion jam> jam w. vocal jam>
Traveled Too Far
Swamp Music (Lynyrd Skynyrd cover which Mike introduced as this is how it would have been in 1972 if skynyrd listened to Phish)
The Field > (Scott M was on lead vocals for either the Field or another door)
Another Door >
Things That Make You Go Hmm (the old C&C music factory tune had my hands in the air and shaking my booty-Craig Myers on vocals for this one)
Crumblin Bones
. percussion jam * (Scott and Tom sat out on stage Mike joined in on the end on bass)
. Dig Further Down
. E: Meat
Only A Dream >Soulfood Man

* with Ken Lovelett on lapdrum

If these guys happen to pass through your town within the next three weeks be sure to check them out. You will not be disappointed. And check out Scott Murawski's blog from tour. It will give you an inside on how musicians view and work their craft. Plus he often has a fun question of the day like what do you drink at Starbucks and What would you bring on a bus that your going to be on for a month (earplugs, Ipod and Ipod charger, a laptop and or blackberry and a deck of cards).

And as I was walking off the concert room floor and heading out one of the doors to the lounge, Mike was being escorted back into the room by one dude and passed like 2 inches from me. I just smiled and nodded. Perfect end to a great night of music.