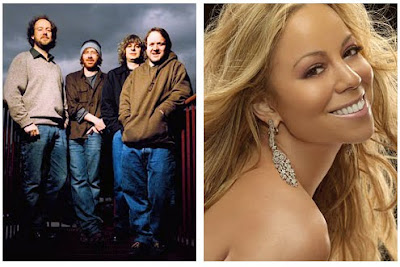 EW’s Music Mix is searching for the Greatest Guilty Pleasure Musical Act of All Time. Last week Phish took an overwhelming win over Nickleback and has moved on to Round #2 to face R&B legend, Mariah Carey. Although a "Guilty Pleasure" refers to something one enjoys despite feeling guilt for it, Phish fans want their band to win, even if it means they’re really losing.

Poll: Which guilty pleasure do you prefer?

**UPDATE**
EW has posted this on their site:

"In part due to multiple voting irregularities and other behavior not in the letter or the spirit of this game, Phish advanced past Nickelback in Round One. NOTE: Continued funny business will result in disqualification. UPDATE: “Funny business” is defined as “hacking the system in order to vote multiple times,” as well as “Not really participating, just wanting Phish to win because ‘Phish always wins.’” Thank you."

Email ThisBlogThis!Share to TwitterShare to FacebookShare to Pinterest
Labels: Phish, Take The Poll