American Idol: It's Archuleta vs. Cook in a Battle of the Davids 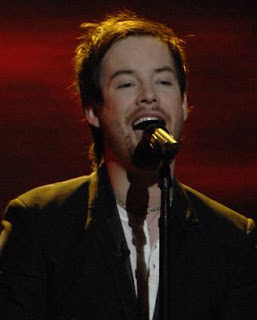 David Cook-- Your Next American Idol?
It was 25-year old alt-rocker David Cook vs. 17-year old Mormon popster David Archuleta in last night's boxing-themed American Idol finale. Each David got the chance to sing three songs before America voted for the last time-- Cook pulling out U2's I Still Haven't Found What I'm Looking For and Collective Soul's The World I Know, while Archuleta took on Elton John's Don't Let the Sun Go Down on Me and John Lennon's Imagine. In addition to those songs, each contestant also had to try on one of the (God-awful) numbers penned by the American Idol songwriting contest's 20 finalists.

For more Idol goodness, check out my full American Idol Recap.
Posted by change100 at 4:20 PM