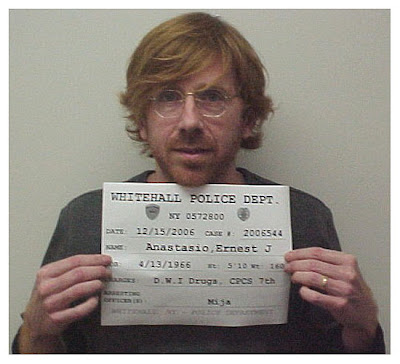 From my local newspaper the Albany Times Union:

Anastasio was facing class D felony charges after he was arrested in Whitehall on Dec. 15, 2006, with an assortment of prescription medications, including hydrocodone, Percocet and Xanax, which had been prescribed to another person.

"He did very well in the drug court," Kortright said. "If they do well and don't have past violations, then they are recommended for reduced sentences."

He was sentenced to three years' probation; three others in the program also received reduced sentences in court Wednesday.

Anastasio entered the treatment program in April 2007. He will graduate in mid-June. Kortright said the musician completed community service and had one violation during his treatment time. Anastasio was also tested weekly for drugs.

During treatment, Anastasio lived in Saratoga Springs, and the district attorney said that county probation will determine whether the rocker should still maintain his residence there.

The rocker faced one to three years in state prison had he failed the treatment program.

Kortright said he asked Anastasio to use his celebrity to share his story and help others with drug addiction.

Back in January, the rocker led a class through Road to Recovery, an organization that works to help teens overcome drug and alcohol addiction.

Editor's Note: This news even made E!'s news blog... Trey Anastasio Treats Himself to Probation.
Posted by Irongirl01 at 4:20 PM