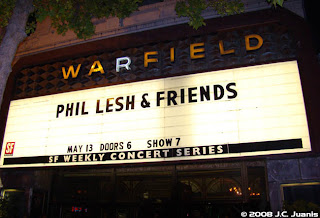 A friend of mine caught the Phil Lesh and Friends concert last night at the Warfield Theatre in San Francisco, CA. Two special things happened. First... Bob Weir sat in for most of the show and in the first set they played the first Grateful Dead album (Grateful Dead - 1967) and in the second set they played the second Dead album (Anthem of the Sun - 1968). Pretty clever and epic at the same time. Just think... this is the first of five shows at the Warfield. I wonder what other tricks Phil will pull out of his hat!

Set 2 (with Bob Weir): The Other One, I. Cryptical Envelopement, II. Quodlibet For Tender Feet, III. The Faster We Go, The Rounder We Get, IV. We Leave The Castle, Nobody's Fault But Mine, New Potato Caboose, Born Cross-Eyed, Alligator, Caution (Do Not Step On Tracks)

Encore: Not Fade Away

* Bob Weir came out for Cream Puff War and played the rest of the show.

So perhaps tonight, Phil Lesh will break out Aoxomoxoa in the first set and Live/Dead in the second set since those are the Dead's third and fourth albums.

Click here for some pics from the 5/13/08 show.
Labels: Bob Weir Phil Lesh and Friends The Grateful Dead