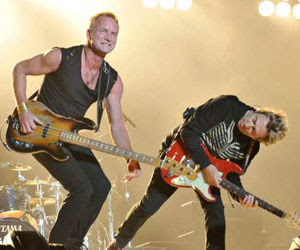 Wil Wheaton recently checked out The Police concert at the Hollywood Bowl in LA. Elvis Costello opened. Wil posted a review on his blog titled bring on the night . . . and the assholes. Seems like Wil had a great time except for some assholes around him. I feel his pain.

The Police put on a tremendous show. They've been playing the same songs for thirty years, but like Elvis Costello before them didn't show any obvious signs of "we've been playing this song for thirty years" fatigue. They sounded great, it was clear that they were having a lot of fun and enjoying each other's performances, and their energy was great. They were most certainly not phoning it in, and if we hadn't been surrounded by assholes, it could have been one of the greatest shows I've ever seen... More