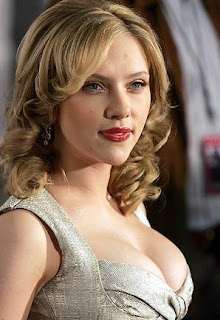 Stick to acting. And wearing designer outfits that show off your cleavage.

P.S.-- Here are some of my favorites.
The Top 20 One-Star Reviews of Scarlett Johansson's Anywhere I Lay My Head on iTunes
dani_defenes: "duuuude... it does not get more WTF than this. Who let her do this? As Michael Kors might say-- sounds like someone was drinking the kool-aid when this was put together."

pha...: "I buried my voice under a million other sounds so you could only kind of tell that I can't really sing."

kaiser5: "I honestly thought this CD was a joke, either that or some kind of Tom Waits parody. Frankly, anyone who feels otherwise is musically clueless."

peterpanlovesd: "What in the world is this? I'm scared."

tksandfc: "I'd rather listen to the Wiggles. Or Barney."

njaero: "This is like something that I would sing while gietting drunk at 3 a.am, banging out rnadom things to tunes like my jewelry box, or playing with spoons."

volt: "She sounds a bit like a tone-deaf android with mechanical failure."

musicadm: "You don't give children knives to play with and obviously you don't give Scarlett an 8 track and some microphones."

nickna: "Please just go back to taking hot pictures of yourself almost naked."

Vaporpark: "if I wanted to head Senad O Connor id drown a puppy in a bucket of water."

MaverickMuze: "YOUR VOICE MAKES ME WANT TO CHEW TIN FOIL AND GET SEVERAL TOOTH CANALS IN THE PROCESS."

RockHardforChrist247: "It kind of sounds like whales mating...and the instruments sound like noises that come from McDonalds Happy Meal toys."
Posted by change100 at 4:20 PM