A comedy in the spirit of This is Spinal Tap. This is a National Lampoon "mockumentary" of the Jam-Band scene. Electric Apricot actually played a few unannounced gigs in California during 2004 and 2005 to shoot footage and the film made its way around the film festival circuit including Bonnaroo's Music & Arts Festival. The film was just released on DVD (May 13, 2008) and there is an accompanying music CD which includes songs by Electric Apricot as well as Bob Weir, Gov't Mule, Jerry Garcia & David Grisman, Stiff Dead Cat, Henry Thomas, and Larry LaLonde.

-Written and directed by bassman, Les Claypool, who stars as drummer/vocalist Lapland "Lapdog" Miclovik in this flick.

"Making a film... it's a non-stop kick to the testicles."— Les Claypool (on his directorial debut)

The movie follows the fictional Jam-Band Electric Apricot as it rises up thru Jam-Band circles and follows their road to the granddaddy of music festivals Festeroo. I laughed at the theme song: "Hey are you going to Burning Man". The trailer shows the typical hippie stereotype's like the burning of sage to ward of evil spirts, space-dancing festival goers, and hula hoops (personally I never hula hooped at a show but I did hacky-sack). Pass the Patchouli and order me a veggie burrito!

You can check out other clips here. 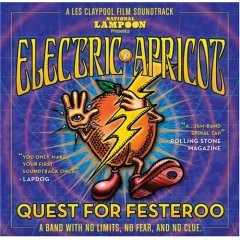